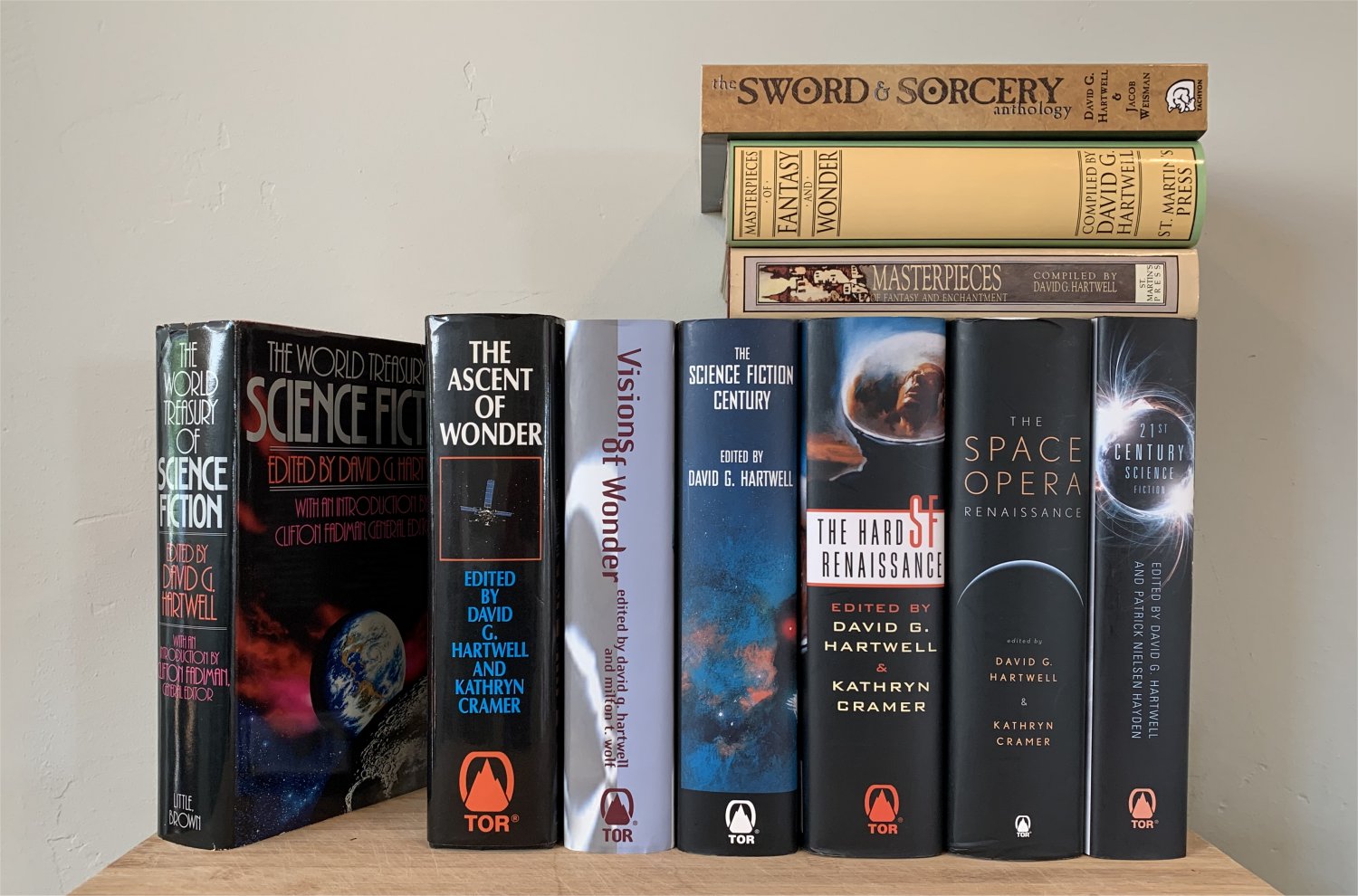 David G. Hartwell's early big anthologies were two that re-examined the nature of the horror genre, and two books of fantasy stories, compiled with the assistance of Kathryn Cramer, first published by the Science Fiction Book Club and then a few months later by St. Martin's. The two horror anthologies are compiled on the Horror Anthologies page.

Hartwell's first SF anthology, the World Treasury of Science Fiction was compiled for the US Book-of-the-Month Club as one the club's series of World Treasuries. Club editor Clifton Fadiman provides a short foreword. Selections date "from the modern period", 1939 to present.

Hartwell formally teamed with Kathryn Cramer for The Ascent of Wonder, a big anthology that explores the meaning and development of "hard" science fiction, with stories ranging from Kipling and Poe to the present. Three long introductions by the editors and Gregory Benford sketch the history of hard SF and describe numerous examples both of stories and novels.

Visions of Wonder, subtitled "The Science Fiction Research Association Anthology", was designed to serve as a textbook of current SF and fantasy (as of the mid-1990s). Selections include works by popular authors -- McCaffrey, Norton, Jordan -- and deliberately avoid most classic stories from the 1960s and before, given their appearance in so many earlier anthologies. The book features introductory critical essays to each section, by John W. Campbell, Jr., Judith Merril, Algis Budrys, and others, and concludes with "A Selective Guide to Scholarship" by Gary K. Wolfe.

The Science Fiction Century focuses on the 20th century and to some extent focuses on writers other than those who already appeared in the two previous volumes.

The Hard SF Renaissance, essentially a sequel to The Ascent of Wonder, compiles the many varieties of science fiction that fall under the increasingly diverse "hard SF" subgenre, especially as new writers reinvigorated it the 1990s and 2000s. The earliest stories included here were first published in 1991, just before the earlier anthology was released.

The Space Opera Renaissance is a companion to the earlier Hard SF Renaissance but to a larger extent a parallel volume to that book and its predecessor The Ascent of Wonder; this book considers "space opera" as a separate entity from hard SF, and extends its purview back to the begining of the SF genre to show how stories that have been described by that label have changed, along with the reputation of the term. Stories thus range from 1929 into the beginning of the 21st century.

Next came the first big retrospective anthology to focus on SF of the 21st century, co-edited with Patrick Nielsen Hayden, gathering work by authors who may have debuted earlier, but who "came to prominence" since 2000, as the editors explain in their introduction. Only three of the authors (Stross, Schroeder, and Watts) appeared in any earlier Hartwell anthology listed here.

The final book here, devoted to sword & sorcery, is more casual than the earlier books; it has an introduction by David Drake, but no commentary by Hartwell or Weisman.