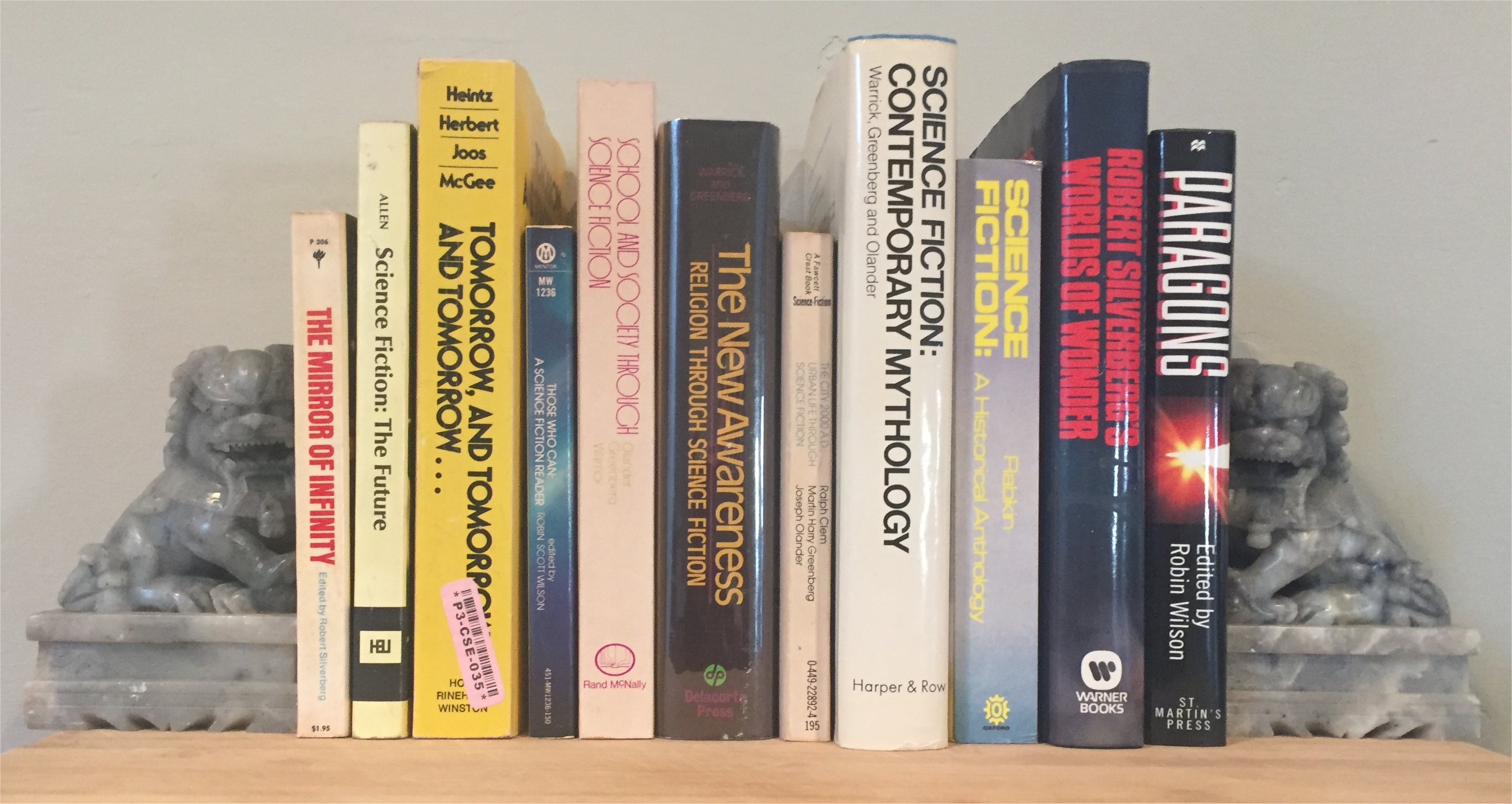 Among the many varieties of textbooks compiled here, the earliest is Robert Silverberg's The Mirror of Infinity, subtitled "A Critics' Anthology of Science Fiction", in which each story is prefaced by a ~3-5 page critical essay -- in effect, a textbook for writing superior science fiction. Critics include Jack Williamson, James Blish, Damon Knight, Kingsley Amis, Alexei Pansion, and Brian W. Aldiss.

More of a conventional textbook is Dick Allen's 1971 volume, with questions for discussion after each story and appendices with topics for research and suggestions for further reading. Allen's preface "assumes that science fiction has become a respectable genre of literature" as a result of the popularity of various books, movies, and songs over the previous decade. (Allen did one later volume, in 1975, included in the combined contents below but not in the photo.)

Another early kind of textbook was Robin Scott Wilson's Those Who Can which, similar to the Silverberg volume, is an anthology of stories with, in this case, commentaries by their authors about how to write science fiction.

A much larger but more casual textbook to teach SF to readers came in 1974 from Bonnie L. Heintz, et al, featuring an introduction by Frank Herbert about how the reader should think about science fiction. The book is divided into various thematic sections -- robots; other worlds; aliens -- but there are no story notes or supplemental material.

Also in 1974 Martin H. Greenberg (bylined Martin Harry Greenberg on most of these volumes) launched a series of thematic anthologies that used science fiction to explore various academic topics like American government, psychology, and sociology, from various publishers including Prentice-Hall, Rand McNally, and later St. Martin's and Fawcett. Each book is credited to a combination of co-editors, and typically arranged contents into thematic groups along with questions for discussion following each story. (Just 3 of the 13 are shown in the photo.)

Greenberg's most frequent co-editor, Patricia S. Warrick, did two later more ambitious volumes in coordination with the Science Fiction Writers of America (SFWA) and the Science Fiction Research Associates (SFRA). The first of these includes 10 essays or articles among the stories, by Robert Silverberg, Pamela Sargent and James E. Gunn, Isaac Asimov, and others, along with bibliographies for each thematic group of stories.

The second SFRA anthology includes stories by many of the same authors, but only three stories repeated from the first book (by Blish, Le Guin, and Smith).

Eric S. Rabkin, then at the University of Michigan, published his "Historical Anthology" in 1983, considering science fiction "the artistic twin of modern science, born with it after the Renaissance, growing with it through the Industrial Revolution, and finally--in our own day--becoming part of the fabric of our civilization." 27 stories and excerpts are presented chronically in five sections: The Emergence of Modern Science (de Bergerac to Voltaire); Nineteenth Century (Hoffmann to London); Early Twentieth Century (Wells to Stapledon); The Golden Years (Asimov to Pohl); and The Modern Period (Zelazny to Le Guin).

Like The Mirror of Infinity, Robert Silverberg's later Worlds of Wonder volume combines stories with critical analysis, but this time Silverberg provides all the critical essays himself, and does so in the context of personal reminiscences about his career and the development of his own standards for what constitute good science fiction stories. The book opens with a 34-page autobiographical essay, "The Making of a Science-Fiction Writer."

And Robin Scott Wilson produced a later anthology, Paragons, as Robin Wilson, in the same manner as his earlier book: stories with commentaries by their authors about their craft. The book includes "A Workshop Lexicon" by Bruce Sterling, describing cliches and other flaws that characterize poor writing.

Most reprinted authors in this group: Robert Sheckley (14), Isaac Asimov, Ray Bradbury, Arthur C. Clarke, and Robert Silverberg (11 each), then Poul Anderson, Robert A. Heinlein, and R.A. Lafferty (8 each).