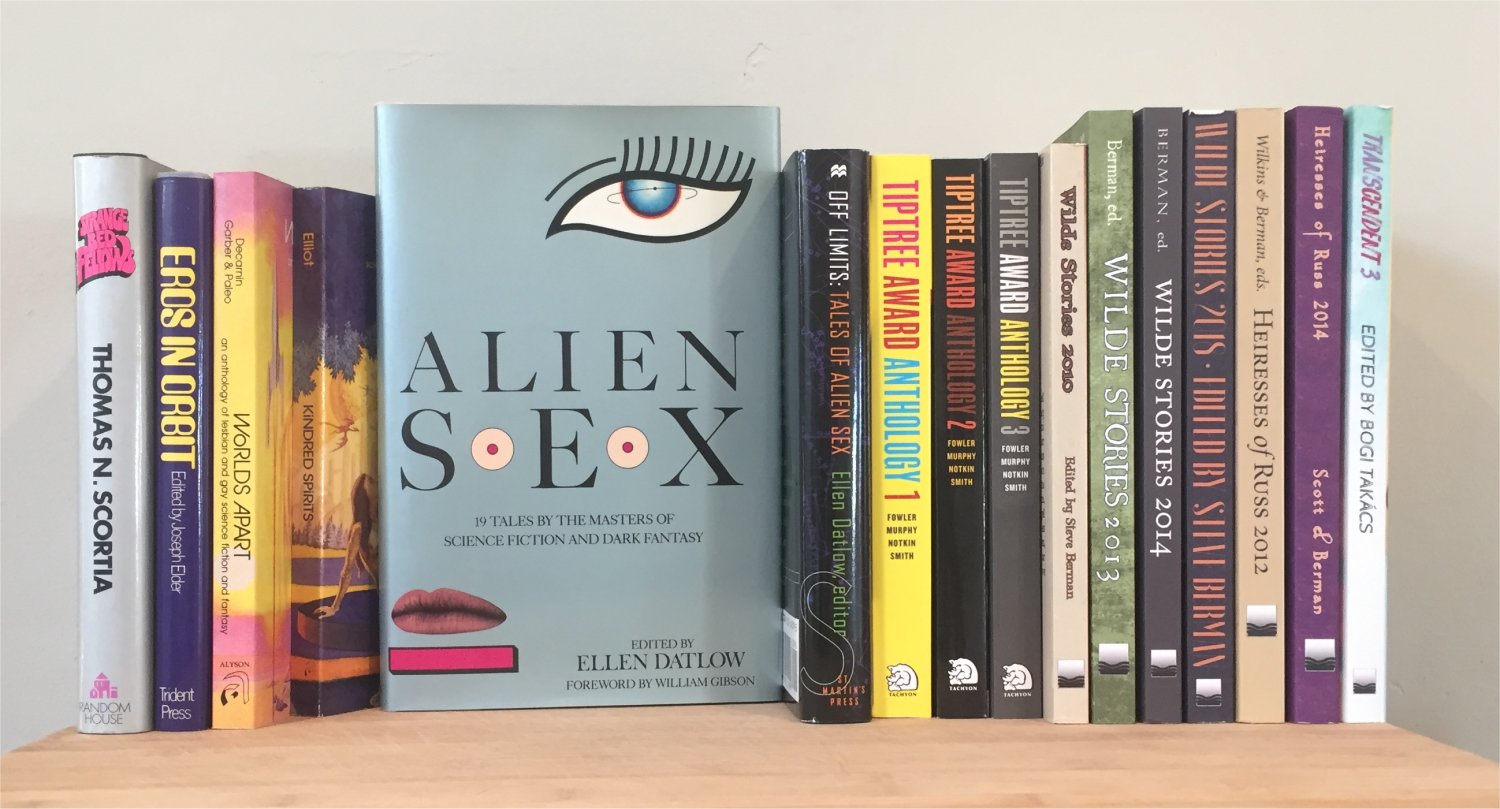 One aspect (not necessarily the most significant one) of the "New Wave" movement in 1960s science fiction was the increased frankness about and depiction of sexual themes, in contrast to the relatively prudish '40s and '50s. A handful of stories in the 1950s, e.g. by Philip Jose Farmer and Theodore Sturgeon, had broached such themes, but they became frequent and routine by the late 1960s. The first anthology of "Sex and Science Fiction" was Thomas N. Scortia's 1972 Strange Bedfellows, reprinting those Farmer and Sturgeon stories and several others, with the balance of the book original stories by Silverberg, Dann, and others. (A subsequent book, Joseph Elder's 1973 Eros in Orbit, gathered only original stories, by Silverberg, Malzberg, Bryant, and others.)

Two anthologies of gay and lesbian SF appeared in the 1980s from Alyson Publications, from different editors but with matching cover art by George Barr. They gathered a couple stories from the '60s or before but contained mostly works of the 1970s, including famous titles by Russ, Delany, Tiptree, and Varley.

Several of Ellen Datlow's earliest anthologies were on sexual themes, beginning with 1990's Alien Sex, compiling 10 original stories and 9 reprints, the latter including notable titles by Niven, Tiptree, and Willis. Later Off Limits was mostly original, with just four reprints, including stories by Silverberg and Delany. (Datlow also did Little Deaths in 1994 and Lethal Kisses in 1996 on horror themes, with only original stories.)

(Only the reprinted stories in the above volumes are included in the combined TOC below.)

The earliest awards for SF/fantasy on any kind of gender issues were the Lambdas beginning in 1989, though no anthologies of nominated or winning works have ever appeared. The James Tiptree, Jr. Memorial Awards began in 1992 with a broad scope, for work that "expands the roles of women and men for work by both women and men." (As of 2019, the name of the award is to be changed to the "Otherwise" Award.) Three anthologies, edited by a team led by Karen Joy Fowler, appeared in the mid-2000s from Tachyon. Consisting mostly of works recognized by the Tiptree Awards, the books also include the occasional earlier classic, including works by Lethem, Tiptree, and Le Guin.

In the past decade Lethe Press, like Alyson specializing in LGBT fiction, has published three series of annuals. Wilde Stories, edited by Lethe publisher Steve Berman, gathers the best of each year's "Gay Speculative Fiction," with 11 volumes through 2018 and apparently ended. Companion series Heiresses of Russ, by Berman with co-editors, ran six volumes until 2016. Still ongoing is Transcendent for transgender speculative fiction, with varying editors.