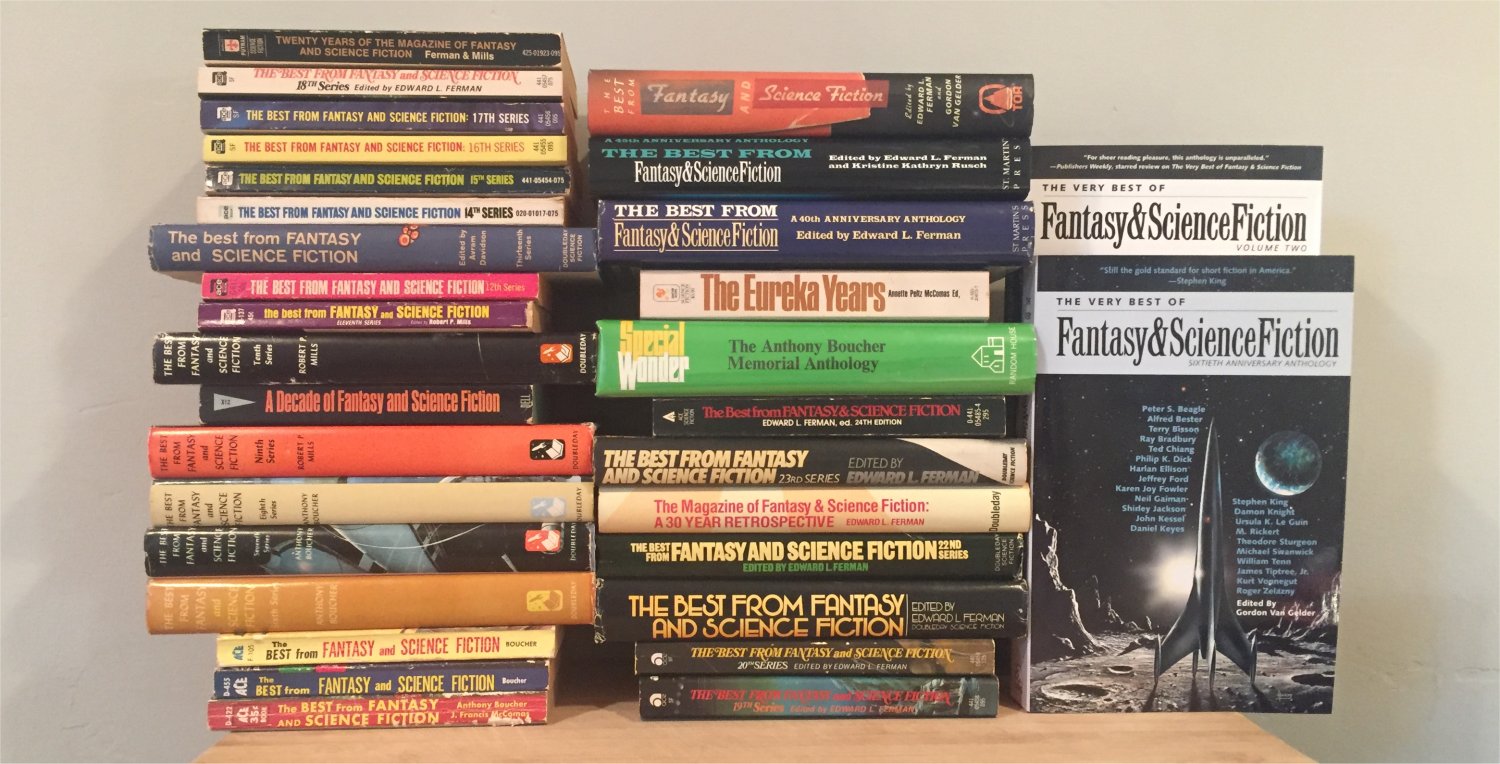 The Magazine of Fantasy, renamed The Magazine of Fantasy & Science Fiction with its second issue, debuted in 1949 as the first of two magazines to challenge Astounding's dominance in the decade of the 1940s. Founded and edited by Anthony Boucher and J. Francis McComas, F&SF contrasting with Astounding in its attention to literary quality and, of course, the inclusion of fantasy along with science fiction.

In 1952 the editors began a series of annual anthologies, published at first by Little, Brown in hardcover (with no paperback editions), and with the third volume going to Doubleday in hardcover and Ace in paperback. (The Ace paperbacks often left out poems and other short pieces from the hardcover editions.) The third volume in 1954 limited its selections to stories from 1953 issues, and so the series became a set of best-of-the-year annuals like those of Bleiler-Dikty (who came before) and Judith Merrill (who started later), albeit limited to works from a particular magazine, and with only the occasional exception of a story or poem from a prior year. This pattern remained as editors came and went: after Boucher and McComas, there were Robert P. Mills, Avram Davidson, and then Edward L. Ferman. After the 18th volume (full of 1968 stories) the series slowed a bit, the 19th covering 1969 and 1970, the 20th covering 1971 to early 1973.

Meanwhile anniversary anthologies appeared at years 10, from Robert P. Mills; 20, from Mills and Ferman; and 25, from Ferman. The first two were not best-of-best anthologies, but 'extras' containing material that hadn't been included in the annuals (with three exceptions in the 20th anniversary volume). The 25th anniversary volume gathered just six stories from the magazine's occasional special author issues published so far, along with the accompanying tribute essays and bibliographies. This 25th anniversary anthology took the place of the 21st book in the series of annuals; there was no "Best from Fantasy and Science Fiction: 21st Series."

Meanwhile Ferman edited the first true retrospective anthology of F&SF with The Magazine of Fantasy & Science Fiction: A 30 Year Retrospective in 1980, selecting best-of-best stories from three decades. Subsequent anniversary volumes were incremental: the 40th, 45th, and 50th anniversary volumes included just stories from the 5 or 10 years since the previous volume. A final true best-of-best volume appeared in 2009 with Gordon Van Gelder's Sixtieth Anniversary Anthology in 2009. With so much material to draw from, he published a companion Volume 2 in 2014.

Two additional volumes are included here. J. Francis McComas produced a pair of volumes in tribute to Anthony Boucher, who'd died in 1968; one for mysteries, and one for f&sf, Special Wonder, that includes stories from as late as 1967, and not all first published in F&SF. (Note in its early years F&SF often reprinted stories; the first annual includes stories by Charles Dickens and Daniel Defoe!)

Then in 1982 Annette Peltz McComas published The Eureka Years, presenting a selection of stories from F&SF but also background on the editors, interstitial correpondence between the editors and various authors, and an appendix of "Recommended Reading" columns from the magazine's early years. As if intended to be read through as a narrative of how the magazine was run, the book has a table of contents without page numbers.

The photo shows all the annuals except the first two, in a mix of first edition Doubleday hardcovers and Ace paperback reprints, followed by first editions of the anniversary and tribute books.