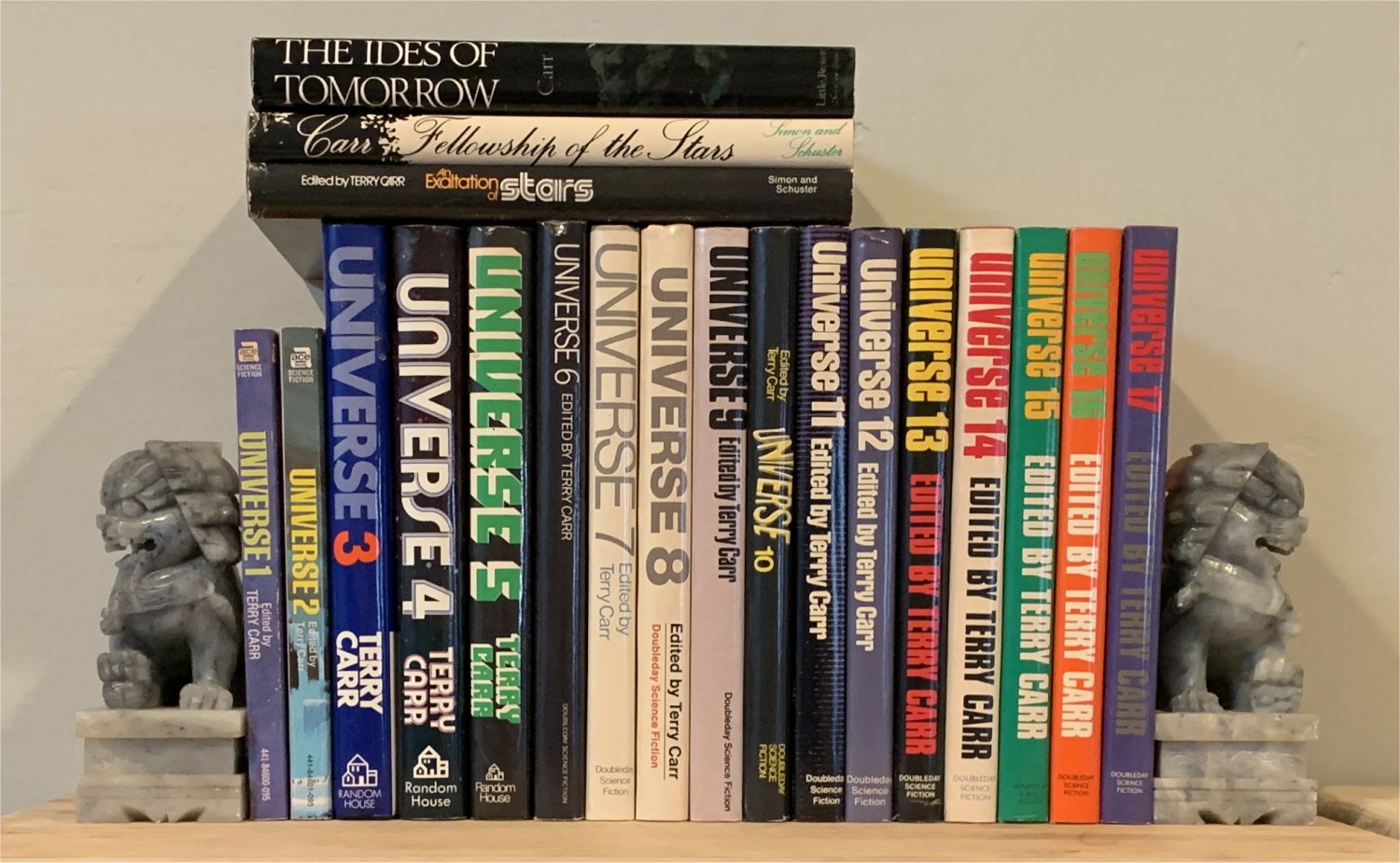 The two major original anthology series after Damon Knight's Orbit were Terry Carr's Universe and Robert Silverberg's New Dimensions, both debuting in 1971. Universe appeared in paperback from Ace Books, where Carr was an editor, and contrasted with other original anthology series in featuring interior illustrations for each story, by Alicia Austin, and cover art that actually illustrated one of the stories in each book. The introduction to the first book states that the contents would be science fiction, with only the occasional fantasy, and no "speculative fiction" at all.

As Carr left Ace and became a free-lance editor, Universe became a hardcover series, from Random House for three volumes, and then Doubleday for 12 slender volumes (all under 200 pages) until Carr's death in 1987.

Universe was arguably the best of the big three original anthology series, certainly in terms of awards, with six stories winning a Hugo or a Nebula: Silverberg's "Good News from the Vatican," Wolfe's "The Death of Doctor Island," Eklund & Benford's "If the Stars Are Gods," Waldrop's "The Ugly Chickens," Bishop's "The Quickening," and Ellison's "Paladin of the Lost Hour." (The other two series each had four Hugo or Nebula winning stories.)

Other notable stories from Universe include Effinger's "All the Last Wars at Once," Rotsler's "Patron of the Arts," Leiber's "A Rite of Spring," Scholz' "The Ninth Symphony of Ludwig van Beethoven and Other Lost Songs," Bishop's "Old Folks at Home" and "Her Habiline Husband," Varley's "Options," Gibson's "The Gernsback Continuum," Robinson's "Venice Drowned" and "The Lucky Strike," Swanwick's "Mummer Kiss," and Sterling's "Cicada Queen."

Carr did three other original anthologies. An Exaltation of Stars is a three-novella volume of stories about transcendence, highlighted by Robert Silverberg's "The Feast of St. Dionysus" and including a story by Roger Zelazny titled after the speech of a dolphin. Fellowship of the Stars has nine stories about friendship between human and alien beings, and includes Ursula K. Le Guin's "The Author of the Acacia Seeds..." Finally, The Ides of Tomorrow, "original science fiction tales of horror," includes Harlan Ellison's "Seeing" and George R.R. Martin's novella "In the House of the Worm."