Disch/Carr/Miller/et al : Ends of the World 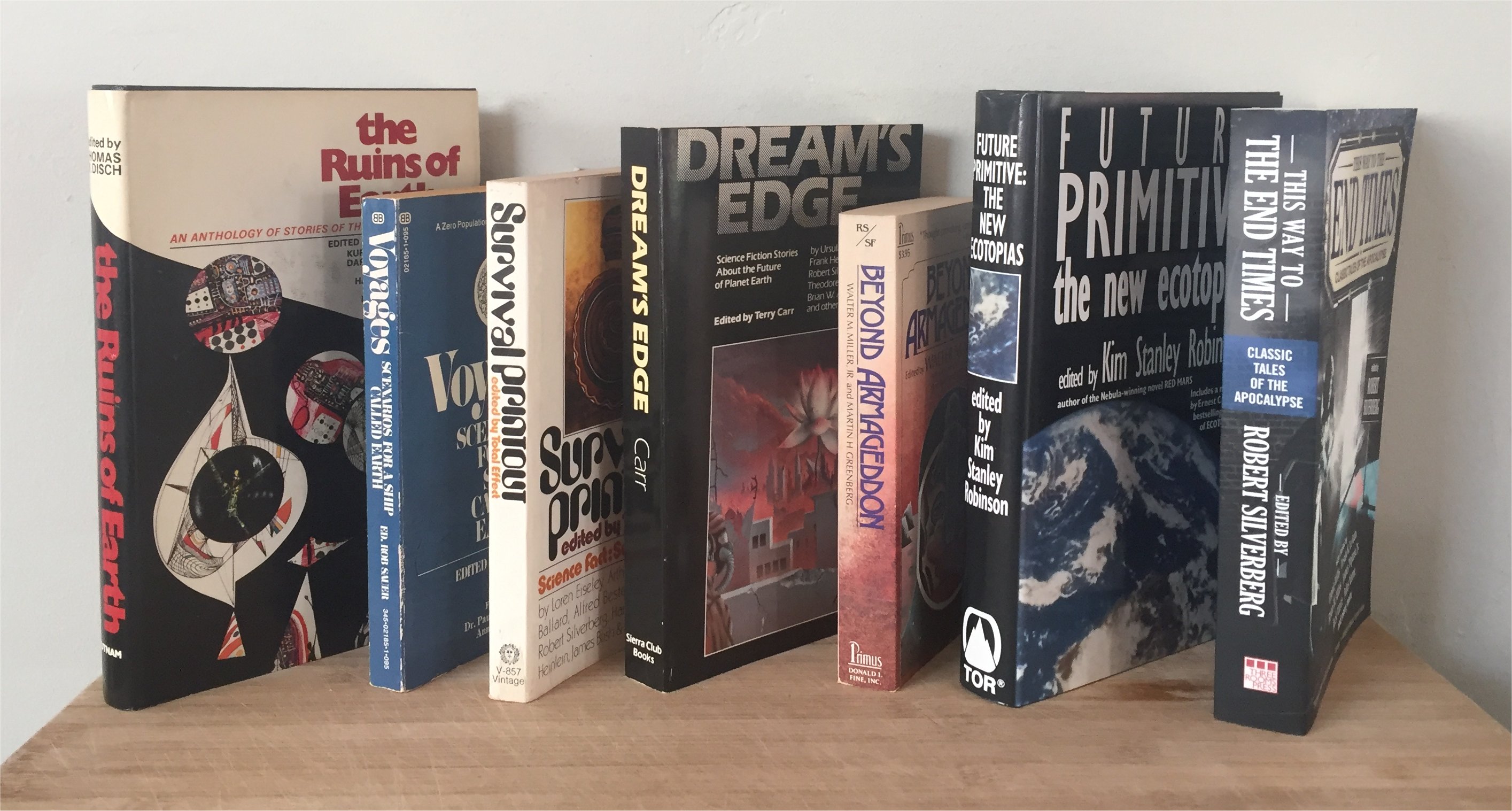 The threat of nuclear annihilation was pervasive in 1950s science fiction, as reflected in classic novels like Pat Frank's Alas, Babylon, Neville Shute's On the Beach, and Walter M. Miller, Jr.'s A Canticle for Leibowitz. The 1960s brought concerns about overpopulation and environmental degradation. Several anthologies beginning in the 1970s addressed these various apocalyptic themes.

Thomas M. Disch's 1971 The Ruins of Earth concerns ecological catastrophe, with six original stories and 10 reprints, including famous stories by J.G. Ballard and Daphne du Maurier ("The Birds," basis for the Hitchcock film). Disch was a provocative but only occasional anthologist, mostly of original stories; relevant but not compiled here is 1973's Bad Moon Rising [isfdb], with 21 original stories and poems about the "worsening political situation around the world," including enduring works by Harlan Ellison, Kate Wilhelm, and Robert Silverberg.

Survival Printout, credited to Total Effect on the cover and to Leonard Allison, Leonard Jenkin, and Robert Perrault on the title page, purports to be a "two-year dialogue" between the editors and Illiac 4, a giant Burroughs Corporation computer. After a couple pages of teletype text the result is a gathering of one essay and three stories in each of four categories, with classic works by Ballard, Bester, Ellison, Simak, and others.

Terry Carr's Dream's Edge, stories "about the future of Planet Earth," was produced for the Sierra Club in 1980. It acknowledges the threats of nuclear war and ecological destruction, but with an optimism that these problems can be solved. The stories are almost all from the 1970s, with classic works by Sturgeon, Le Guin, Waldrop, and Silverberg.

Walter M. Miller, Jr.'s sole anthology, assembled with the assistance of the ubiquitous Martin H. Greenberg, appropriately echoed the theme of his famous novel of a quarter century before, though the anthology is ominously subtitled "Twenty-One Sermons to the Dead." Miller's introduction begins with concerns about current politics and religious fundamentalists, and ranges across all history to explore the notion of a final Megawar. Stories include essential works by Spinrad, Moore, Ballard, Pangborn, Bradbury, Clarke, and Swanwick.

Future Primitive, Kim Stanley Robinson's only anthology aside from a Nebula Awards volume, its subtitle "The New Ecotopias" evoking Ernest Callenbach's classic novel, presents an optimistic take on the dangers of urban industrialization. One original by Callenbach is accompanied by 11 reprint stories, including the entire center novella section of Gene Wolfe's book The Fifth Head of Cerberus.

Finally, Robert Silverberg's first theme anthology in 30 years reaches back to Jule Verne and Olaf Stapledon and forward to a couple original stories and evokes the Biblical notion of apocalypse, with stories by Vance, Leiber, Aldiss, Le Guin, Tiptree, and Willis.

Authors most reprint in this group: J.G. Ballard and Robert Silverberg (4 each), then Ray Bradbury, Fritz Leiber, and Roger Zelazny (3 each).