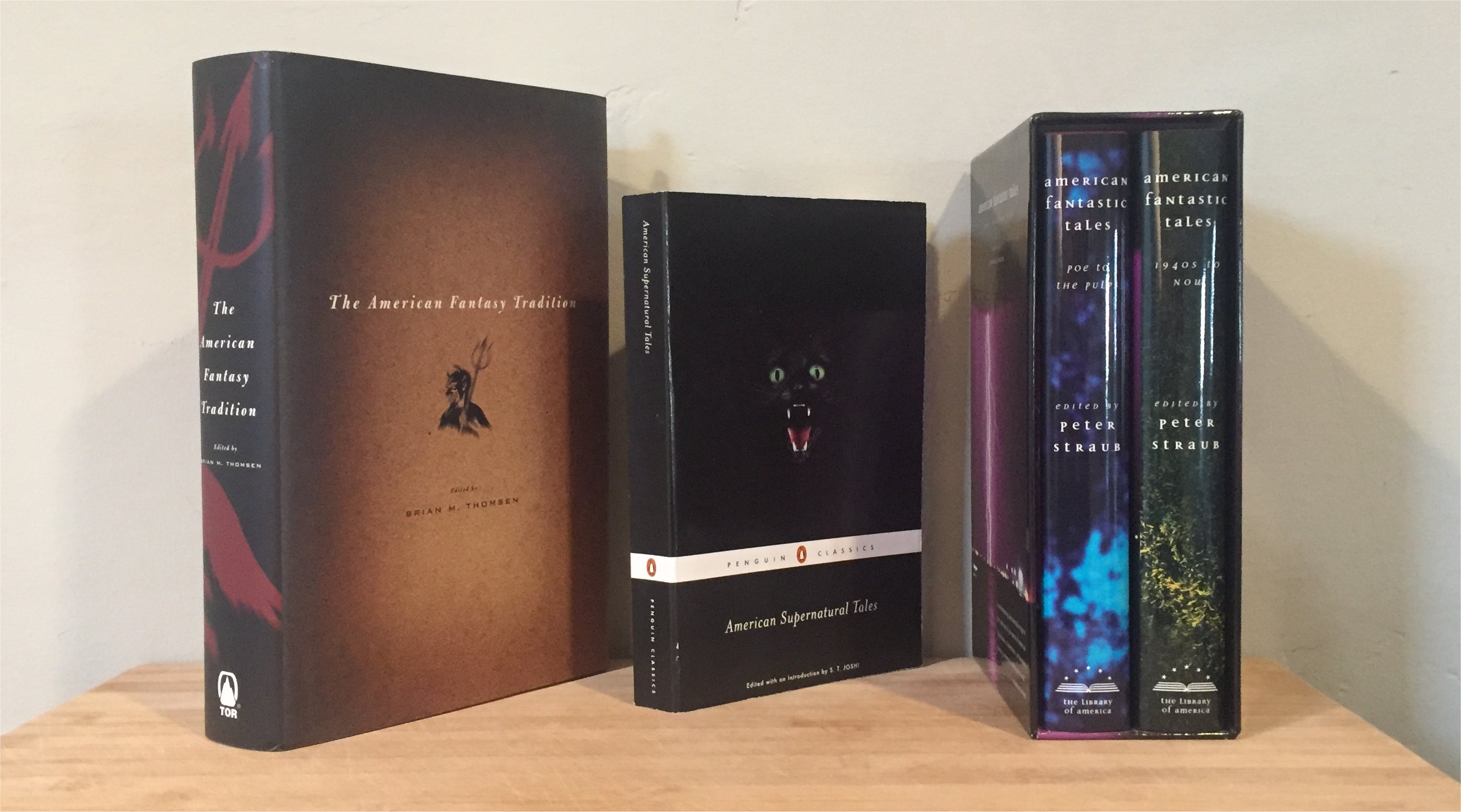 Of all the anthologies with "American" in their titles, there are a dozen or so with "horror" or "gothic" or "fantastic" in their titles, and only one with "science fiction" in its title (American Government Through Science Fiction, listed on the textbooks page). Here are four or five of the most prominent of the fantastic group: one from writer Joyce Carol Oates (not in the photo), one from Tor editor Brian Thomsen, one from critic and editor S.T. Joshi, and the recent Library of America pair from author Peter Straub.

Oates' book compiles literary horror and suspense stories arranged chronologically, from Washington Irving and Nathaniel Hawthorne in the early 19th century to Stephen King, John Crowley, and Thomas Ligotti in the 1980s and '90s. Her introduction identifies the roots of this American tradition in the attitudes of the Puritans in their vast New World, and traces how the taboos in earlier tales have become relaxed in recent works.

Thomsen's book, the product of 22 years of research, is a portrait of fantasy that is distinctly American. The results are divided into three parts: Folk, Tall and Weird Tales; Fantastic Americana; and Lands of Enchantment and Everyday Life. An introduction explores these themes; there's a short introduction to each story; and the book concludes with a critical bibliography.

S.T. Joshi's volume has a range almost exactly like Oates', from Irving and Hawthorne to King, Ligotti, and Oates, though with almost all different works. His introduction reaches back to Greek myth before tracing the development of American supernatural fiction to modern horror films and bestselling novels.

Straub's two books, published separately and available as a boxed set, collect 85 stories presented chronologically from 1805 to 2007. They appeared in 2009, following the Library of America's volumes of H.P. Lovecraft and Philip K. Dick. Straub's introductions explore the nature of horror and the reasons for its resurgence in the 20th century. And typically with LoA books, there are extensive biographical notes, notes on the texts, and notes keyed to page and line numbers explaining obscure proper names and cultural references.